Those who have read my BottleRock post from earlier this summer (http://bookerandbutler.com/bottlerock-2015-keep-on-rockin/) know I’m a live music lover. Options for big name acts coming to Napa and Sonoma are robust, and there is a rich history full of vintage acts.

A few weekends ago at the Robert Mondavi Winery’s annual summer concert series, we saw Trombone Shorty and his Orleans Avenue band…a fun mix of jazz, funk and hip hop hailing from New Orleans. This was my 3rd concert as part of the Mondavi music series over the last 10 years; previously we saw Dave Brubeck and Aimee Mann. So how does that show for musical diversity? This annual series at the winery just wrapped up its 46th year of hosting various musical acts. Margrit Mondavi, widow of founder Robert Mondavi, gave a heartwarming intro to the night, the eve of her 90th birthday! My favorite line was when she said, “wine is good for you. In moderation.” If I am standing in front of an audience on my 90th birthday then bring on the wine– in moderation!But back to the concert series…we so are lucky the music scene is flourishing in Wine Country…proof of that again with the success of BottleRock coming back next year for round 4. But Robert and Margrit have bragging rights to bringing huge class acts to the vineyards. Past names include Ella Fitzgerald, Lena Horne, Benny Goodman, Roberta Flack and Henry Belafonte. But don’t you millennials and Gen-X’ers worry, they are keeping things current, this year in addition to Trombone Shorty, The Wallflowers, Melissa Etheridge and Lyle Lovett also made appearances.

So next year, bring your blanket and picnic relax to some tunes while sipping on their perfect for summer Fume Blanc, and check out one of their shows.

Another festival with historical cred happens on the other side of the Mayacama mountain range, in Sonoma Valley. Bruce Cohn, long time manager of the Doobie Brothers, founded a charity music festival held at his previously owned winery B.R Cohn Winery. A 2-day festival under the oak groves and overlooking the estate vineyards of the Glen Ellen Winery, it takes place in fall during harvest and just as the weather is turning cooler and the leaves are starting to turn…a great time to be outdoors. Started 28 years ago, the festival has a philanthropic slant, donating hundreds of thousands each year among local charities. A local favorite, this festival brings out the rocker, the roller and the biker all of us, and there is a lot of the above in attendance. In addition to the regular headlining Doobie Brothers, bands I’ve seen in years past include Lynyrd Skynyrd, Journey, Gregg Allman, Willie Nelson and Cheap Trick. This year the festival takes a new name, Sonoma Music Festival, and a new location in downtown Sonoma and will feature additional headliners Ringo Starr and Chicago. 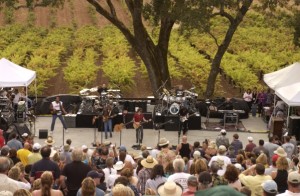 In addition to these annual gatherings, there are big act venues galore up and down both valleys of Wine Country: the Uptown Theater, City Winery Napa, Rodney Strong Winery Music Festival, Green Music Center at Sonoma State University, and Wells Fargo Center for the Arts. So don your best dancing shoes, your favorite cowboy boots, your most beat up biker jacket, or whatever and come sing along…