Hats off to Latitude 38 Entertainment, the group behind the 3rd annual BottleRock music festival that took place last weekend in Napa. I’ve attended all 3 years and I must say this year the experience was outstanding. Sure year one blew us all away with performances by the Black Keys and Kings of Leon, but we all learned about the debacle of no one being paid and the festival went bankrupt. Last year a knight in shining armor swooped in and saved the day, when David Graham and his partners took over, paid off debts and brought us the Cure and Outkast. This year they took it up a notch in all ways. 120,000 festivalgoers attended over the 3 –day event. The devastating earthquake of last summer was actually a good thing as three large buildings on the fairgrounds were so badly damaged; they were demolished, leaving more open space and room for better festival flow.

The talent this year was so diverse, music for everyone. From Imagine Dragons to Robert Plant to Gwen Stefani and her No Doubt to Avett Brothers to Snoop Dog. How many generations and music genres were in that last sentence?!? And proof was in the pudding walking around the grounds and seeing all ages. OK, so it was quite a site to see a little girl sitting on daddy’s shoulders jamming out to a Snoop Dog rap song, but I love that this is a family affair too. Tons of great indie rock too—Cage the Elephant, Young the Giant, Passion Pit and Capital Cities and some new discoveries for me that I’m now following—JJ Grey and Mofro, Courtney Barnett, and Awolnation. BottleRock had so much variety to offer, the biggest challenge was figuring out your own personal schedule of who to hit for a few songs and then on to the next. 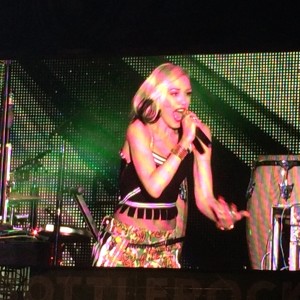 Being that BottleRock is smack dab in the middle of Napa, the food and wine offerings were over the top. Highly acclaimed restaurants such as Morimoto, Oenotri, Redd, La Condesa, Goose & Gander, La Toque were just a few of the options, in addition to loads of food trucks. From sushi poke, to chicken and waffles to paella to bahn mi, it was a food lover’s heaven. And for the wine–Miner Family and Jam Cellars were the biggest sponsors pouring around, but you could also have bubbles from Schramsberg, Sauv Blanc from Etude, Cab from Silver Oak, and the list keeps going. Twomey, Round Pond, Mondavi, Rombauer were a few others also pouring. Pulling up the beer wagon were Blue Moon, Lagunitas and Anchor Brewing.

New this year was the Williams Sonoma Culinary stage where they had celebrity chefs paired with music celebrities whipping it up on stage for spectators. I missed Moritmoto and Snoop Dog making sushi. I read Snoop Dog had never had sushi before and bet that rolling sushi is a bit different than what he’s so good at rolling. But kudos to BottleRock for adding another element of entertainment to make this festival even more world class.

VIP or GA? This was a question posed by many friends contemplating their ticket purchase. While the argument can be made that the GA is where it’s at for the true festival experience, I am all over the VIP experience when it’s an option. This year they took that too up several notches. More sitting areas with more bars, one was a roof covered giant living room situation with palm trees and couches and a DJ spinning tunes. And they connected the 2 main stages this year, previous years VIP’s had to leave one stage area, fight crowds of GA and re-enter VIP at the other main stage area. Lockers! Who would have thought that a locker would have ever been so good?!? It was nasty cold at night for this year’s BottleRock, so to it was key to have a locker located just near the bathrooms where you’ll be visiting every couple hours anyway. Stow away that down jacket and extra layer until you needed it.

As they lights dimmed on BottleRock #3, the press has been remarking with highest of praises. Sure there is room for improvement — working out check in lines and parking lot assignment kinks, but rest assured I’ll be back for more next year. They’ve announced the dates for 2016. Memorial Day weekend, May 27-29. So expect even larger crowds. See you there!